This year MSU football was just awful. They ended up 3-9 overall. MSU had so many problems on and off the field. There were games they should have won and MSU lost. It was a really disappointing season. This team ended up forth in the country last season.  Alabama crushed them in the playoff last year. MSU never recovered from that loss. So, they had a fifth year quarterback in Tyler O' Connor. He did nothing to help this team. But, it wasn't all his fault.

MSU was the most disappointing college football team this season. Head coach Mark Dantonio had no answers for the downward spiral. He said at one of his press conferences everyone had to do a better job. It never happened. Shoddy play on the field,  suspect coaching and internal problems were the demise of this season.

But, something I really feel was a factor of the absence of last season's quarterback phenom Connor Cook. He was outstanding for three years. Winning huge games every season. Cook ended up with the Oakland Raiders in the forth round. He wasn't chosen as a captain and had a problem with former Buckeye great Archie Griffin after the Big Ten Championship. But, if he isn't quarterbacking this team they don't win on a regular basis. That's not even an argument. Will see what happens next season. It was a poor season. 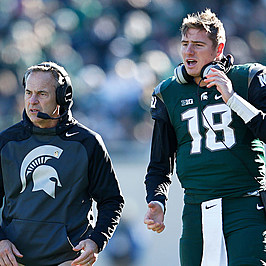