The Detroit Pistons head coach Stan Van Gundy has done a pretty good job since coming to Detroit a couple years ago. Van Gundy has been at other places, like Miami and Orlando in the NBA. Tom Gores the millionaire owner brought Stan Van Gundy in to turn the program around. Joe Dumars, player and former president did win NBA Championships as a player and executive. But, he set this organization back light years with bad contracts and bad draft choices.

The Detroit Pistons do have rich history, going back to Dave Bing, the "Bad Boys" and the Larry Brown era. But, now could it be a new era? Van Gundy got a very lucrative contract to turn this bad franchise into the winners circle. So far they are better and have better players, but this team needs to make the playoffs. The playoffs have been non-existent in the vocabulary of the Pistons for many years.

Stan Van Gundy I believe is a winner. The problem is lack of great players. But, the owner Tom Gores from the state of Michigan and MSU is a great businessman. He didn't buy this team to continually lose. So, what cures losing? Making the playoffs, this team is much closer. 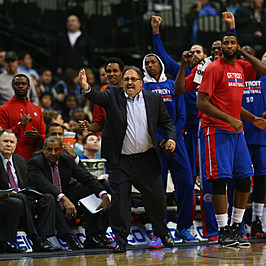