Mark Hollis began his career as a student manager with Jud Heathcoate’s MSU hoop team. There he cultivated a great friendship with head basketball coach Tom Izzo. Hollis worked his way up the ladder working with athletics and administration for years. In the past eight years at MSU there has been more stability in the athletic department than ever. The two main reasons are  MSU President Lou Anna Simon and Mark Hollis.

Michigan State University has both their revenue generating sport (football and basketball firing on all money generating cylinders. In the past some of the presidents, athletic directors and coaches have had large conflicts. Mark Hollis is second in command on the NCAA basketball committee. Some feel down the road he could become the next President of the NCAA. But, for now MSU is in very good hands. Mark Hollis has proven that hard work, persistence and patience pay off. He has become the nation's Walt Disney in the sports arena. 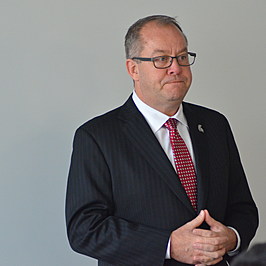 Categories: Articles
Comments
Leave A Comment
Back To Top
The Greatest MSU Quarterback of All Time