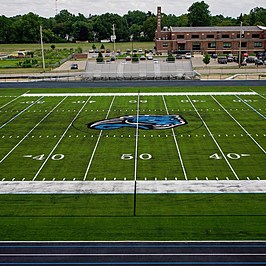 This Friday is going to be epic on Marshall Street. Lansing Catholic High School will be opening their new high school football field. This project has been unbelievable and was built with post haste. I attended LCC and graduated in 1977. No one ever thought this could ever happen. But, someone made a huge donation and other people also contributed to make this happen. This just goes to show you people's generosity.

Lansing Catholic high school never has had a varsity football field. But, they sure have one now. This field will house football, lacrosse, and track. The playing surface is field turf. I played freshman and junior varsity football and we played our games at this field. It affectionately was called the "rock pile". I am telling you from experience this field was full of rocks. I dug one up during a game when I was a freshman during a game. This is a fact!

Now, Coach Jim Ahearn and his staff have to be jacked up for the grand opening of this special football field and facility. Not only has the football complex been erected so has many other new structures, a 300 seat chapel along with many new areas. Lansing Catholic High school was built in the 1960"s as Gabriel's High School. It was transformed into Lansing Catholic Central in the early 1970's. All I can say is Friday night lights has finally arrived at Lansing Catholic High School.

Categories: Articles
Comments
Leave A Comment
Back To Top
Lansing Lugnuts Given The 8th Best Name In Minor League Baseball